Home  Case Studies  The making of the RSF Mini-Museum

The making of the RSF Mini-Museum 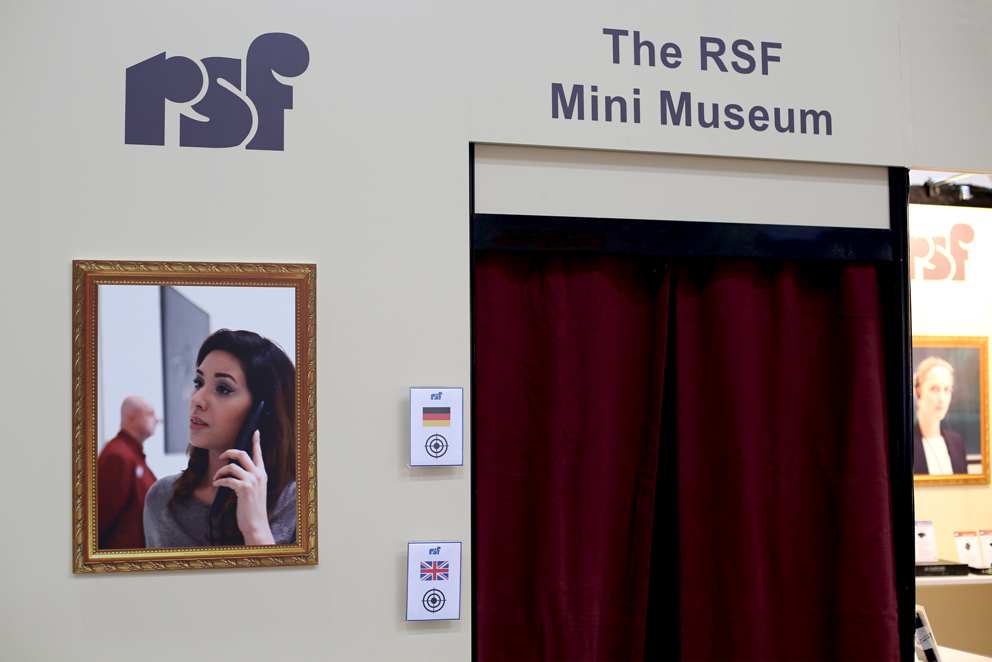 If you visited us at ISE in 2014 you probably were lucky enough to be one of the 200+ people to experience the Mini-Museum on our stand. We used it to tell the story of how RSF has progressed from humble beginnings, producing synthesizers out of a small garage in Toulouse to where we are today. We used a wide array of RSF products when we were putting the Mini-Museum together, and in this case study we will walk through the different elements used, and how they were integrated into a system that was noted as being “the most interesting part of ISE” by a number of visitors.

The concept of the Mini-Museum was to make a linear tour that would show off the hands-free capabilities of our new Optima6 audioguide, and take the visitor through the history of the company. The visit started outside the stand, and after a short introduction allowed the visitor to enter into a passageway guided by lighting, and featuring a variety of videos and display objects. The first product that RSF made was the Kobol, a synthesizer that redefined how music was made, notably by prominent artists, such as Jean-Michel Jarre and Genesis. We synchronised the audio in the audioguide to the video on the screen to show the Cobol, and also to play a short excerpt of Genesis live in concert from back in the 70s when Peter Gabriel was still the lead singer. The lights then guided the visitor through to the next zone where early examples of audioguides could be seen before again dimming and sending the visitor on to a second video. This second video was also synchronised with the audioguides, and gave visitors an overview of the technology that we currently offer, together with some more company information. As a finale we played some more music from Genesis, from the classic album “A Trick of the Tail”, this time synchronizing the lights to the audioguide track as the visitors exited. 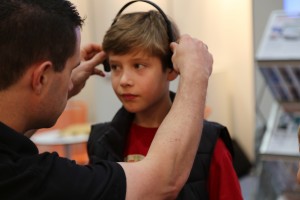 The Mini-Museum was made using our Pilote Show controller to run the show, control the lights, and drive the audio player for our SpotDAP directional speaker. Video playback was taken care of by our ProDVP-HDII and OneDVP-HD video players, while the most visible part, the audioguide that allowed visitors to have the tour in a selection of languages with no interaction necessary was our new Optima 6 audioguide. We also used some external devices, such as electric curtain rails, LED DMX lighting, and HD screens, all controlled by the Pilote.

The programming of the Pilote proved to be relatively simple. By putting the audio track from theaudio-guide in the Timeline of the Pilote show controller,we instantly had a central reference point for all other synch elements. We could thus adjust lighting levels, adjust the timings for the audioguides and video players, and precisely set the lighting transition stagesto all get together perfectly. When programming the lighting transitions for the lighting- to-audioguide synchronisation, we simply used keyboard input to set time markers, and later went back to fill these in with different lighting scenes. All the time the Pilote was running the Mini-Museum, we were also free to use other Timelines, such as a 5-second opening of the entrance curtains (to access the control room), triggering different audio tracks on the SpotDAP directional loudspeaker, adjusting the volume of the SpotDAP, and adjusting lighting levels on the stand.

The entire show was controlled with our Pilote show controller. We were running a UDP transmission app on our Android Tablet, which sent codes via WiFi to the Pilote in order to trigger the various timelines.
We built in feedback, so that the tablet would automatically display when the Mini-Museum was ready for the next visitors. Once the show had been started, the Pilote took and delivered full automation of the Mini-Museum. The visitor’s audioguides were triggered via IR after the Pilote closed a relay contact for the EMZSYN2 transmission pack. The first video was started in synchronisation with the audioguide through another relay contact, the first light was turned on via DMX, and a further relay contact then opened the curtains after the audioguide introduction. Once the visitor had entered it was a simple process of turning up or down DMX lighting channels to encourage the visitor to progress around the Mini-Museum, followed by some further audioguide and video triggering, and at the end the automatic opening of the exit curtains. As visitors were leaving we also provided another example of synchronisation between the DMX lighting and the audioguide, changing the colour of the lighting with the beat of the music. 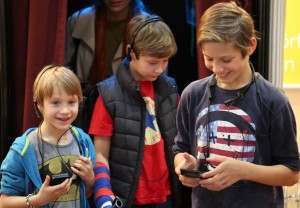 We had a lot of fun putting the Mini-Museum together. It was also great to see the smiles on visitors’ faces as they came out, and to hear the anecdotes from people who had previously worked with the Kobol. We are confident that no-one else at ISE managed to put together such an immersive experience on their stand, and are confident that it has provided plenty of inspiration for real world projects in museums and installations the world over.